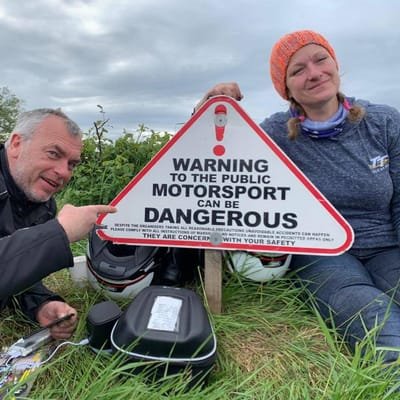 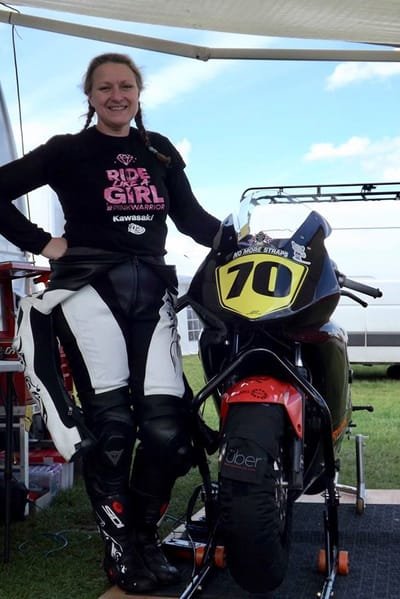 Husband and wife team, Mark & Vanessa
Following an off and a broken wrist Vanessa was finding riding home from track days less enjoyable due to aches and pains from her wrist. This was all the excuse she needed to justify purchasing a van when she got the insurance compensation payment from the at fault driver.
‘Harrison’ the transit was purchased, chocks, bar straps and decent ratchet straps were used but she hated the time taken to secure the bikes. Even with a LWB Transit securing two bikes was a mess of straps and risked rub damage to the fairings. Not happy to trust the straps not to come loose she asked around and several friends already had No More Straps and highly recommended them.
Two sets were ordered despite Mark being adamant that the mounts would be a waste of money and that straps were perfectly fine as he had used them for years etc. Thankfully he totally changed his mind after fitting and using the mounts.

After hearing that the couple who developed and made No More Straps had stopped making the mounts, we approached them re buying the business. They had original idea for and developed the mounts, they had produced them since at least 2015, through the years the design developed and improved and the two I purchased were some of the last they sold.
We are proud to have further improved the mount and to be able to continue to promote this great system.

Social media and IT are far from our strong points so no overly fancy website or promotional images for us, but we can promise you a damn good product that does what it says on the tin.
When we can all get out to play again and you are ever in the BEMSEE paddock,  please come and say hi to #70 and #72 in the mintwin class